Have you ever tried not to read the text of a sign? Inscriptions may be considered a deliberate communication device (dispositif épigraphique). This kind of device exposes culturally educated individuals (including very poorly culturally educated ones) to any kind of writing and to its inevitable effects on human cognition, even if the reader is reluctant to read it. Somebody who learned to read cannot avoid reading in front of written text. Inscriptions are spread everywhere, among cities and countries since Antiquity. They are all around us. Inscription are deliberately in a specific place. They are a kind of “stone storytellers,” that narrate something important for a family, a group, a community, an institution, and so on… As talkative traces of the past, inscriptions have stories to tell also to the society that keeps those traces of its own history (epigraphic echoes). These fundamental cultural heritage artifacts are often outdoors, in their original context or not.

Some epigraphs of Antiquity seems sometimes so determined to communicate with people that epigraphers called them “speaking stones”. Their text is often written with the first singular person (“I”) and even addresses the reader using an imperative form. It often happens on Roman gravestones for instance. In a study made by Maurreen Carroll on “speaking stones”, about 40% of the epigraphs examined by Carroll explicitly refer to the viewer as “lector” (reader) or ask the visitor to read the text. The inscribed words refer to the viewer as “quisquis es”, “quicumque” (“whoever you are”, Carroll, 2007, 39-41). They bless, advise, wishing the reader a good life, asking to stay for a while or to go away, asking questions or tasks to the reader, telling the story of the deceased. The monumentum of the dead becomes more than his or her memory, it becomes a medium set up on the road to open a dialog between the dead and passers-by.

Digital epigraphy is a central discipline of Digital humanities. As such, it is able to bring unexpected digital mediation talkative stones. In short we need to understand how to make these stones “speak again”, express their histories, recreate the relationship they once had with their community with our societies and insert them in a network of stories to discover and understand.

We asked ourselves these questions and we came up with an experiment that exploits social networks and collaborative media. Voluntary users interacted with a fictional character that showed them the primary sources through the eyes of people who were born in the environment where those sources belonged.

People with complementary interests and projects composed our team. Together we gave birth to this living character that showed different primary sources and technologies. Marion Lamé gave the original idea, supervised our activities and provided precise epigraphic sources to include in the project. Anna Maria Marras’s expertise in the use of social networks was essential to bringing the attention of stakeholders to museums.

This idea allowed us to blend together several different projects: The first one is an interactive e-catalogue of medieval Pisa. Pr. Enrica Salvatori lead this work in progress through a L.S. degree in Digital Humanities. This case study illustrates a technological interpretation that forces us to rethink the traditional catalogue for outdoor exhibitions (Lucius’ ebookus). It consists in a multimedia path (videos, 3d objects, html5) for a more ‘alive’ tour of Pisa. In particular, the Camposanto chapter of Camilla Tanca (Arias, Cristiani, Gabba , 1977) contains two Roman inscriptions among the main medieval theme. 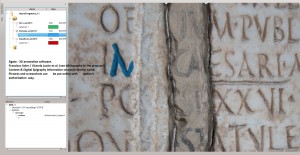 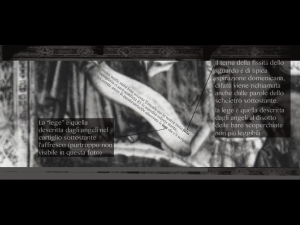 “STORY STELEing”, presented during Museomix 2012, is the second experiment included in Hi-storytelling and is the fulcrum of our research. The installation showed how a Latin inscription becomes again, after centuries, an accessible speaking-stone. G. Rouvière presented this project, that is, a dramatic and emotional way to tell the story of Lucius Secundius Octavius” (CIL XIII, 2027). Massimiliano Vassalli, with expertise in history and Ancient languages, made our character speak Latin and Greek fluently and created new events and additional characters to bring together the narration.

The narrative dimension of the web and especially of social media offers wide possibilities. Finding the right narrative model that suits the media we choose to use is not an easy task. As Marie-Laure Ryan says in Beyond Myth and Metaphor: Narrative in Digital Media (Ryan, 2002) we need to “emancipate from literary models” and discover how to present to the audience the possibility to interact with the story, without altering its historical contents was our research challenge. For that reason, as we will explain, the construction of the scenario and the timeline of narration were deliberately not consecutive (used a flashback technique). The interaction was merely explorative; users could dialog, in Latin and Greek then translated in Italian, with the fictional character on social networks, see his life and the primary sources presented.

Other media offer similar “back to life” narrative, especially in contemporary art, but less in real cultural heritage. Since 2011, in the exhibition “My Winnipeg” at La Maison Rouge in Paris  (2011) and on his set at Centre Georges Pompidou (2012), the Canadian filmmaker Guy Maddin brings back to life lost silent movies in his work called “Spiritisme”(Morgan, 2014). Guy Maddin, in the public making-of of his film and in his live installations, explains that he artistically found a way to communicate with the past. He knew a lot of silent movies that were made in the history of cinema were lost forever and a remake was impossible. He brought the films alive again through a live show in which the lost script “possessed” the actors. Interpreting an event or a story from another time is a delicate field. It is easy to offend the memory and the person related to it. A deliberate fictional interpretation can show a possible side of a past reality without closing the interpretation of the unknown (Maddin, 2011). As Guy Maddin used scattered pieces of information to build a new artefact with a strong bond to its past, we let the spirit inside the epitaph posses its social media manifestation.

We started, taking care to respect the rules of each platform, with:

Facebook had a prevalence because of previous confidence and in terms of target audience. The storytelling took place in this framework and created empathy along with suspense in the audience showing a few days of travel through the time and space of Lucius Secundius Octavius, a real historic character.

From the epitaph of our character we read that he died in a fire, half naked (and trying to rescue an object) in his house. The authors were not his family but three freedman that were with a good chance his lovers, and Europhilus, as he describe himself.

The aim was to integrate different projects concerning digital history, augmented reality and historical primary sources, especially inscriptions. Among them a few were especially relevant.

Through Lucius’ travel we showed several type of primary sources in less or more innovative ways, from simple photos to ebooks integration with 3D. Through social networks, the audience followed Lucius’ travels from Treviri, his birthplace in 238 a.c. to these days in Florence, city of the MWF2014 conference with two stops, one in Lyon and one in Pisa.

The fictive narrative found its structure around the following real primary sources:

Other historical characters, attested to by other Roman gravestones and historically coherent, but fictionally in relation with Lucius, appeared to put an end to Lucius’s story and revealed his situation to him and to the audience: Aurelius Paternus, Aurelia Timocratia, Lucius Faenius Telesphorus. This could have gone on. A role-playing game dynamic created a coherent narrative that could take the experiment a step further.
Creating an environment that can be enjoyable and realistic in terms of scenario is not an easy task. Our experiment brought us to the following requirements for a new evidence-based historical narrative:

Among many, we identified four different ways to structure a narration with accurate historical information that creates a realistic or plausible scenario:

Our new perspective derived from the pros and cons noted during the experiment:

Figura 3. Conversation in Latin plus translation between Lucius and his facebook’s friends

Moreover, ancient languages were challenging for non-experts and were surprisingly overcome and stimulating.  Our experiment left in the hearts of who participated a bond with the past and to our character. Those who could not participate and want to know more about his adventure can read it on Storify (https://storify.com/lucius2octavius/lucius-s-journey)